In November 2020, top pathologist Dr. Roger Hodkinson, an expert in virology told government officials during a zoom conference call that the current coronavirus crisis is “the greatest hoax ever perpetrated on an unsuspecting public. Hodkinson pointed out that his role as CEO of a biotech company that manufactures COVID-19 tests means, “I might know a little bit about all this.”

“There is utterly unfounded public hysteria driven by the media and politicians, it’s outrageous, this is the greatest hoax ever perpetrated on an unsuspecting public,” said Hodkinson.

The doctor said that nothing could be done to stop the spread of the virus besides protecting older more vulnerable people and that the whole situation represented “politics playing medicine, and that’s a very dangerous game.”

Hodkinson remarked that “social distancing is useless because COVID-19 is spread by aerosols which travel 30 meters or so before landing.”

Hodkinson slammed mandatory mask mandates as completely pointless. “Masks are utterly useless. There is no evidence base for their effectiveness whatsoever.”

“Paper and fabric masks are simply virtue signaling. They’re not even worn effectively most of the time. It’s utterly ridiculous. Seeing these unfortunate, uneducated people – I’m not saying that in a pejorative sense – seeing these people walking around like lemmings obeying without any knowledge base to put the mask on their face.”

The doctor also slammed the unreliability of PCR tests, noting that “positive test results do not, underlined in neon, mean a clinical infection,” and that all testing should stop because the false numbers are “driving public hysteria.”

The doctor said, that it was simply “outrageous” to shut down society and stated it “was just another bad flu. I’m absolutely outraged that this has reached this level, it should all stop tomorrow.”

Hodkinson’s credentials are beyond question, with the MedMalDoctors website affirming his credibility.

Hodkinson is not the only expert in this area that has spoke out against “pandemic”. Nearly 6,000 experts, including dozens from the UK, say the way the Government has handled the Virus is having a devastating impact on physical and mental health as well as society.

Even Kary Mullis, the creator of the PCR technology that is being widely used to test for so-called ‘cases’ of COVID-19, did not believe the technology was suitable for detecting a meaningful presence of a virus.

Mullis said, I don’t think you can misuse PCR. [It is] the results; the interpretation of it. If they can find this virus in you at all – and with PCR, if you do it well, you can find almost anything in anybody.” He continued “That could be thought of as a misuse: to claim that it [a PCR test] is meaningful. It tells you something about nature and what is there. To test for that one thing and say it has a special meaning is, I think, the problem.”

“The measurement for it [the virus] is not exact; it is not as good as the measurement for apples. The tests are based on things that are invisible and the results are inferred in a sense. It allows you to take a minuscule amount of anything and make it measurable and then talk about it.”

In August 2020, the  CDC released a report admitting that many Deaths being counted as COVID-19 deaths were actually caused by underlying conditions.

According to the report only 6% of deaths have COVID-19 as the only cause mentioned, revealing that 94% of patients who died from coronavirus also had other “health conditions and contributing causes.

The numbers published are exactly what is to be expected. When you look at the number of suicide and overdose deaths in 2020, it is easy to see that the few extra deaths in 2020 are attributed to that category not COVID-19. 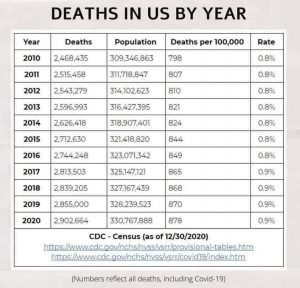 The COVID-19 death toll has been seriously inflated, which the CDC admitted, just days after Biden’s inauguration. So much so that the Biden administration is considering authorizing the Federal Emergency Management Agency to allocate COVID-19 funding for climate change projects.

A Stanford University antibody study estimated the fatality rate from the virus is likely 0.1% to 0.2%. The World Health Organization (WHO) had estimated that the death rate was 20 to 30 times higher and called for isolation policies. On which version do you think the media focused?

Even as the lockdowns lifted the MSM continued to spread false information about the virus claiming it would take 1.2 million lives, but it didn’t.

Global shut downs, economy crashed, experts in the field have said many times that COVID-19 is being used as a tool for political gain, The CDC adjusted their numbers just days after the Inauguration, and now the current administration is taking money away from the “pandemic” to fight climate change?

COVID-19 is a bad flu at worst. Politicians and the MSM, should be held accountable for telling us otherwise before, and much worse, after they knew the facts.