If you are not convinced satanic sex cults are operating through out our society and right under our noses, let me introduce you to Marina Abramovic, a 74 year old Serbian performance artist, that claims to test the limits of the human body.

Marina incorporates occult symbolism, and a ritual in nearly every event. Her art work includes nudity, blood, snakes, cutting pentagrams into her stomach and other various parts of her body. By her own accounts of her childhood she was emotionally and psychologically traumatized by her distant mother.

Now, it is important for you to understand Talmudic Judaism, in order to understand Marina Abramovic and the satanic elite. The Talmud is the Satanic version of the Torah. The Jews have an oral version of the Torah called the Tanakh, some call it the Mikra, that also contains the Talmud. However, the Talmud a small group of real Jews are familiar with is not the Talmud being used today. The Babylonian Talmud has taken precedence since 1905 and is blasphemous. In fact every Jew today is taught using this particular Talmud.  It refers to Jesus as an idol, and His worshippers as idolaters. Todays Talmud article claims Jesus was into beastiality and is burning in hell in a pool of semen. Only Satan himself could come up with something so outrageous.

The Talmud is a set of 63 books based of the teachings of the Pharisees, and written by ancient Rabbis. Remember, we can see in the Bible that Jesus stood up to the religious establishment of his day, they were an ancient “Cabal”. A group of leaders that wanted to own the people and lived primarily for money and power. Jesus told them they were a synagogue of Satan. The Pharisee’s forced the people to follow a certain set of rules, which can be found in the Talmud. It is more of a legal code and has nothing to do with religion. This is the book many elite of today still follow, these are the beliefs they still hold.

The Jewish “6 pointed Star of David” is a hexagram it is a pagan symbol. The hexagram is formed by uniting the water triangle, with the fire triangle. To the sorcerers, and high priest and priestess’ it is a powerful tool to invoke satan. The Star of David actually has nothing at all to do with David, it IS the same satanic used in witchcraft. If you study the hexagon you’ll find something astonishing, it has 6 points, forms 6 equilateral triangles, and in its interior forms a 6 sided hexagon. Revealing the number of Satan, the devil, or the beast 666.

The pentagram and the star of communism is the same 5 point star that Marina likes to carve into her stomach there is no difference they are one and the same. Her “art” is ritual satanic worship in public view. Nearly every performance is a satanic ritual Including blood, guts, mock corpses, dismembered body parts, satanic pentagrams, and human sacrifice.

Here we see Marina Abramovic sitting on top of a pile of bones. 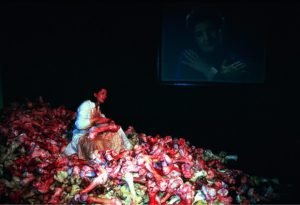 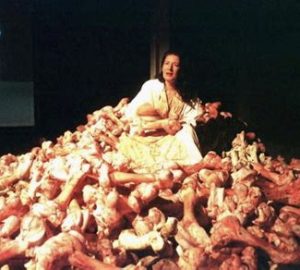 Here she has a man laying on a cross, mocking Jesus Christ. 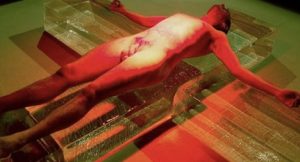 This isn’t even the worst of it. Marina, being a high priestess in the satanic church, holds events at her house, a sort of dinner party if you will. Sometimes there is actually food. Here is Marina Abramovic preparing for one of her Spirit cooking dinners.

Usually, spirit cooking is performed in the kitchen as it considered the “heart” of the home. The ceremony is performed to provide energy to feed the spirits.

Satanic cults believe that spirits also need food, and since it cannot be physically devoured, the conversion into light, sound, or emotions can connect the spirits to the food. The ritual was first introduced by Aleister Crowley in a religion and ceremony he created, in which people would consume the contents of the “cake of light”. Consuming the cake of light was supposed to create a connection between man and the eternal. The Contents of the cake: Honey, oil, menstrual blood and sperm.

This doesn’t look or sound like any dinner I would want to be a part of. This Dinner is simply Marina building an altar to Satan. Here are a few more pictures if you are not yet convinced. 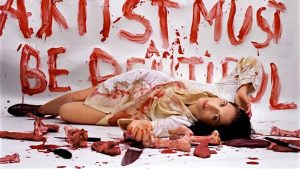 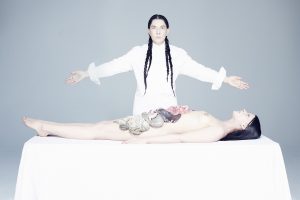 Ok so by now you’re probably well aware of the fact that Marina Abramovic is a severely disturbed individual but what does she or any of this have to do with the Elite, the political giants, and A list Celebrities today?

It all started the same way Pizzagate started, with the Wikileaks emails. Specifically, the email Marina Abramovic sent to John Podesta asking if him and his brother Tony would be joining her for a spirit-cooking dinner at her home.

The Podesta email sent people searching for the truth, what is spirit cooking? This is when we found our that John Podesta, Hillary Clinton’s Presidential campaign chairman, chief of staff to President Bill Clinton, and counselor to President Barack Obama, is on a first name basis with this woman. He also participated in spirit cooking rituals. This has to make you ask yourself what kind of people have we have running our country? Notice the writing on the wall. 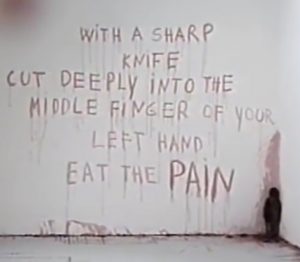 Now consider this, how many times have you cut your middle finger on your left hand? How often does this occur? My brother worked in the deli at a supermarket and I can tell you, he cut his fingers many times but never his middle finger on his left hand. NEVER. So why is this such a common occurrence among our political figures? Notice the band aides, on the middle finger of the left hand? 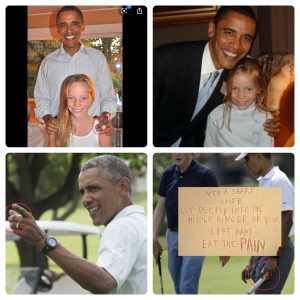 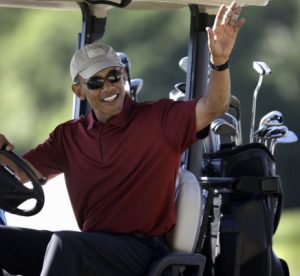 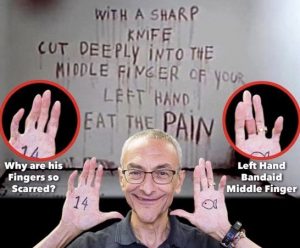 This is just something to consider when you begin looking into this. You may be thinking, surely Hillary didn’t know about this, but then you see this email exchange between Huma Abedin and Hillary (H) where they are discussing “Marina” coming on a trip with Hillary so that argument is no long valid. That link email exchange was released directly by and is on the FOIA (Freedom of Information Act) website of the federal government.

Marina’s reach is far beyond just major political figures, the men and women running our country. She also has huge influence with A list celebrities. 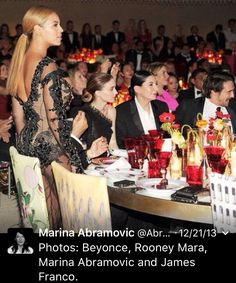 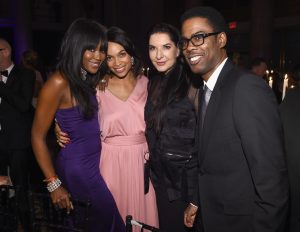 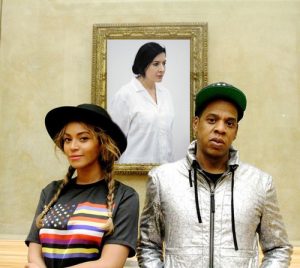 It seems as though she came out of nowhere and started appearing everywhere. This is a woman that knows everyone! She calls Lady Gaga her best student. I wonder what she taught Lady Gaga, a self proclaimed satanist.

Here are some of the methods she learned from Marina.

Lady Gaga and Marina Abramovic are close friends. They’ve done a few fundraiser’s  together and hold each other in high esteem. Their Fundraisers however are extremely racist and put heavy emphasis on bodily fluids. It should be noted that the African American man they painted white and made run through the woods naked was later found dead in the desert. 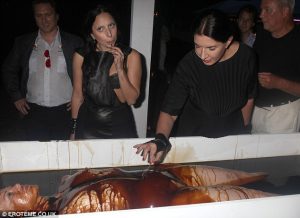 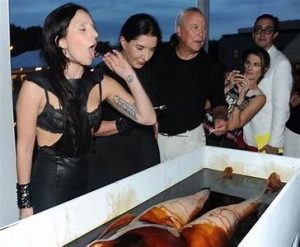 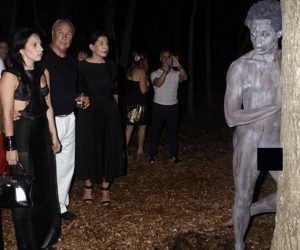 You may be telling yourself that just because she knows these people doesn’t mean they practice satanic rituals, which often include human sacrifice, drinking human blood, and eating human FLESH. Well here is a spirit cooking fundraiser that many celebrities attended, MOST in fact. Now ask yourself is this the type of fundraiser normal thinking people want to attend? 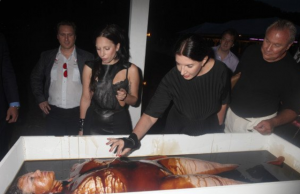 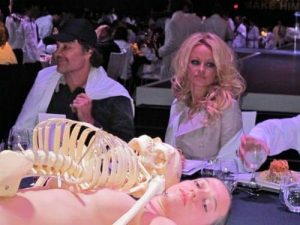 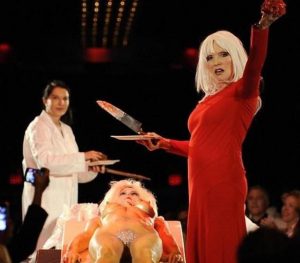 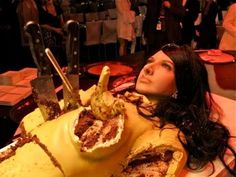 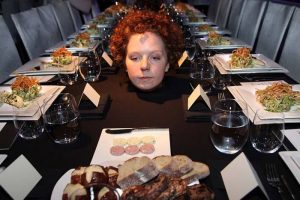 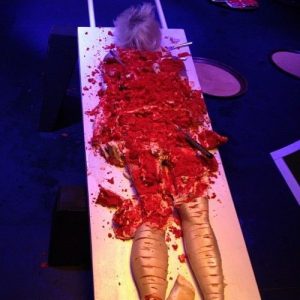 Tickets to this event ranged from $2,500 to $10,000. Gala table prices ranged from $25,000 – $100,000! For what? Human heads sticking out of the table to look like decapitated head centerpieces, red velvet cake shaped like a human body that they simply tore into? On every plate is a single slice of cheese pizza, some noodles, and 2 walnuts. Who pays that kind of money for that kind of food? This will make more sense if we remember the FBI pedophile code words that we discovered when investigating Pizzagate. According to the FBI pedophile codes, pasta = little boys, cheese pizza = little girls, and walnuts = person of color.

The price range makes more sense if you consider the highest paying celebs got to go to the extremely exclusive private event after the dinner. Nobody except the people who where in attendance know what took place at that after party, but given the price variations and the choice of entree I think we can make a pretty educated guess.

Inside this article about this event there is a video please take a few minutes to watch it. I can’t stress enough the adult content warning that should come along with this video! [Video Link] 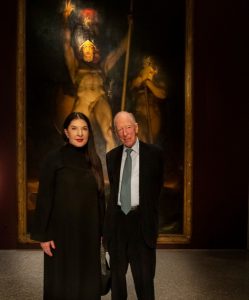 If you still don’t believe Marina is a satanist and you actually think this is just “art” here she is with Jacob Rothschild, a member of the “satanic elite” or the cabal. They pair is standing in from of a painting called “Satan summoning his legions.” The description of the painting is: ”It is dominated by a muscular male figure, naked apart from his sword, helmet and some carefully placed drapery. He is Satan, the rebel angel, who has been sent to Hell. Standing by a lake of fire, he summons his followers.

Most people are shocked that they never heard this before. Why doesn’t anyone speak out? The answer is, they do speak out. The media covers it up, or claims it has all been debunked when that is in NO WAY true. Sometimes notable people do get through to us and we still don’t believe them. Look what Mel Gibson had to say about Hollywood, he called Hollywood an “institutionalized pedophilia ring”.

Liz Crokin, a respected and well known reporter, lost her job for reporting on this issue and Pizzagate. They completely ruined her career. She still educates people on her research findings. They [the elites] do not want the real truth about them getting out. They will do anything to hide it and the main steam media WILL NOT report any of it. Perhaps because they are involved, but more in that to come. There have been documentaries that have been released, dismissed and pushed to the back burner.

Please Don’t take my word on any of this. There is so much more on this topic. This woman is a Satanist. She uses the same rituals and techniques as Aleister Crowley and she has celebrities, extremely powerful people and their cronies eating out of the palm of her hand. Ask yourself how this “artist” has such a huge influence among such powerful people. I will leave you with one last video, this is disturbing, viewer discretion advised.