The whole controversy known as Obamagate is a very large and complicated “conspiracy” that took place in the highest halls of power, primarily in the waning days of Obama’s second term.

I used the word conspiracy, and it’s being misused a lot these days, so here is the official definition.

con•spir•a•cy (kən-spîr′ə-sē)
n. An agreement to perform together an illegal, wrongful, or subversive act.
n. A group of conspirators.
n. An agreement between two or more persons to commit a crime or accomplish a legal purpose through illegal action.

Obamagate falls under all three primary definitions of the word. It was expanded upon as well.

“A combination of persons for an evil purpose; an agreement between two or more persons to commit in concert something reprehensible, injurious, or illegal; particularly, a combination to commit treason, or excite sedition or insurrection; a plot; concerted treason.”

Spot on. So let’s get started…

Donald J. Trump decides he was going to run for president. Immediately, the “Deep State” jumps into action. Someone that is outside the power structure is NOT allowed to become the President of the United States. At first, the MSM and many within the establishment did not take the run seriously and did their best to quickly discredit Mr. Trump. But he hit a nerve and gained traction with the American people who were fed up with the status quo in Washington, D.C. As he gained more and more popularity, they started tossing out the racism card, the adultery card, etc. But none of those really had any effect on his newfound popularity in the eyes of conservatives. They did everything they could to make Trump look bad. But it didn’t work.

So they needed someone bigger. They needed something that would be at such a high level that only treason would be the charge, and there would be no coming back from.

Crossfire Hurricane was the code name for the counterintelligence investigation undertaken by the Federal Bureau of Investigation (FBI) in 2016 and 2017 into links between Trump associates and Russian officials and “whether individuals associated with the Donald J. Trump for President Campaign were coordinating, wittingly or unwittingly, with the Russian government’s efforts to interfere in the 2016 U.S. presidential election”.

From late July to November 2016, the joint effort between the FBI, the Central Intelligence Agency (CIA), and the National Security Agency (NSA) examined evidence of Russian meddling in the 2016 United States presidential election. The FBI’s team enjoyed a large degree of autonomy within the broader interagency probe.

The FBI’s work was taken over on May 17, 2017, by the Special Counsel investigation of 2017–2019, which eventually resulted in the Mueller Report. Mueller concluded that Russian interference occurred in a “sweeping and systematic fashion” and that there were substantial links with the Trump campaign, but the evidence available to investigators did not establish that the Trump campaign had “conspired or coordinated” with the Russian government.

Trump and his allies repeatedly promoted conspiracy theories asserting that the Crossfire Hurricane investigation was opened on false pretenses for political purposes. A subsequent inquiry by Justice Department Inspector General Michael E. Horowitz, who was appointed by Barack Obama, released in redacted form in December 2019, did not find political bias in the initiation of the FBI investigation.[3] The Inspector General also determined that the FBI made 17 errors or omissions—some of them severe—in its FISA warrant applications to the Foreign Intelligence Surveillance Court (FISA Court) for surveillance of Trump aide Carter Page. Inspector General Horowitz found no testimonial or documentary evidence that political bias against Trump tainted the initiation of the investigation. On January 23, 2020, two of the four FISA warrants were declared invalid by the Department of Justice. In addition, James E. Boasberg, a Washington D.C. federal judge, also said surveillance collected against Mr. Page lacked a legal basis.

It is now coming out that virtually all grounds for initiation of this investigation were knowingly false and orchestrated by the highest levels of the government illegally colluding with one another to create the appearance of treasonous actions by the Trump campaign to sway the election.

Even Obama was aware and took direct interest in the investigation as he did many others to protect himself, even back in 2016 he wanted to be directly kept informed of the Hillary Clinton email server issue:

In a Sept. 2, 2016, text exchange, Page writes that she was preparing the talking points because “potus wants to know everything we’re doing.” Potus is an acronym for president of the United States.

Then later on, as it was really starting to look bad for Hillary, Obama interjected and:

According to Rep. John Ratcliffe, R-Texas, who cited transcripts of her private testimony in July 2018 before a joint task force of the House Judiciary and Oversight committees to make the remarkable assertion.

Ratcliffe tweeted: “Lisa Page confirmed to me under oath that the FBI was ordered by the Obama DOJ not to consider charging Hillary Clinton for gross negligence in the handling of classified information.”

Obama was clearly aware of all these scandals, was briefed on them, and when necessary either shut them down or, in Trump’s case, ratcheted them up.

Even when I searched for videos related to it, Youtube clearly has tailored the auto-suggestions. Even when I clarified and added one more word such as “Obama” or “Trump”, it returned 0 suggestions 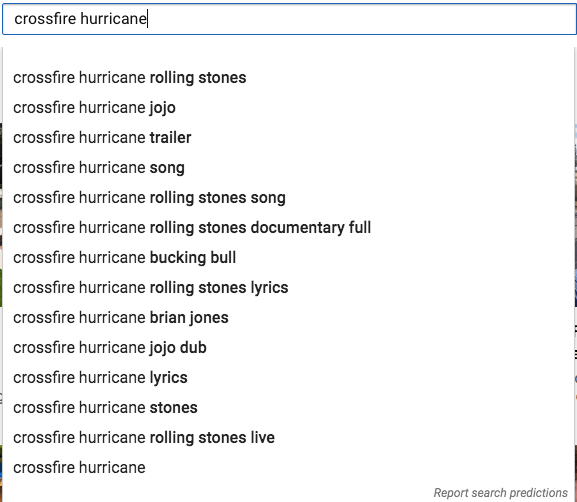 Do your own digging and research so I am not accused of creating my own narrative, all the information is out there.

The pieces are coming together, the dots are being connected and Justice will prevail.

Visit out affiliate and stock up today!