Scientific Creation of the Universe vs. the Biblical Story

I’m going to keep this pretty simple and straightforward and try not to get off on too many tangents, even though there are many to cover.

Ok, now that those statements are out of the way, let me begin. 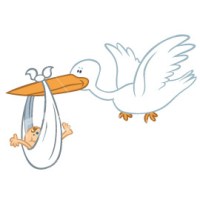 When you tell stories to your children about things such as “where a baby comes from”, do you tell them that “Daddy inserted his penis into mommy until…”? Well, you get the picture.

No. You tell them allegories like “the stork brings babies…”, “God brought you to mommy” or any number of other simplified stories meant for toddlers, passed down over generations. A child’s mind is just too young to understand the complex nature of physical human mating rituals. So, allegorical stories, told to “children”, sets the stage for how I believe the biblical creation story came to be.

It is pretty widely accepted among theological circles that the first five books of the bible are attributed to Moses.

Let’s look at Moses from a traditional biblical perspective. Word was, he was set adrift in a river, by his mother Jochebed, when the Egyptian Pharaoh ordered all Hebrew male children to be killed by drowning in the Nile (river).